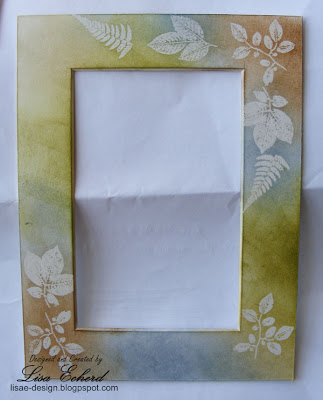 Happy August!   The temps and the calendar sure know it is August.

Last weekend I needed a birthday gift for a relative I really don't know all that well - as far as hobbies and things you might normally use as inspiration for a gift.  He is very close to his parents and I had a photo of them just out in their yard on their 70th wedding anniversary earlier in the year.   So I thought I'd frame it for him.  I purchased a frame for a 4x6 photo that had a plain white mat.  To spice it up a bit, I stamped some leaves in Versamark and embossed with clear powder. I then went over the entire mat with several distress inks.  Before framing, I added the anniversary date  at the bottom.

My photo is only of the mat because my aunt was adamant that I never show the photo to anyone. It was actually a good picture even if she didn't think she was dressed for it :-)  Anyway, I hope her son was exempt from the 'anyone.'

This week, I've been getting some photos cropped and off to the developer so I'll have more things to scrap.  I got in my ArtfulDelight August kit a bit early and it is marvelous!  I'm anxious to do some more scrapbooking but I've let myself run low on photos.

Hope you are having a good week!
Posted by Lisa Echerd at 6:30 AM

Email ThisBlogThis!Share to TwitterShare to FacebookShare to Pinterest
Labels: Papercraft - other