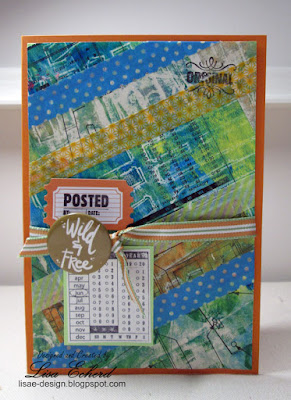 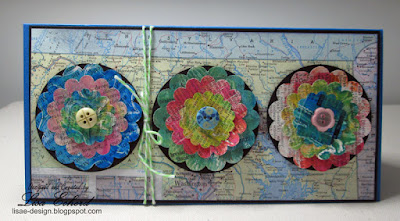 Some of my most popular YouTube videos are on using various inexpensive or found tools.  In this video I'm using a few more 'found' objects. One was given to me by my BFF.  It has something to do with cake decorating and it makes a great impression for gelli plates.

I use bookpaper to make the prints and at the end, create a card using some of the prints and an older stamp set.  The best thing is that I already have my husband's birthday card done months early.  Video:

If you are interested in bookpaper, check out my Etsy shop at Lovely Layers Art.  Thanks for watching!
Posted by Lisa Echerd at 8:40 AM 1 comment:

How Nerds do the Beach 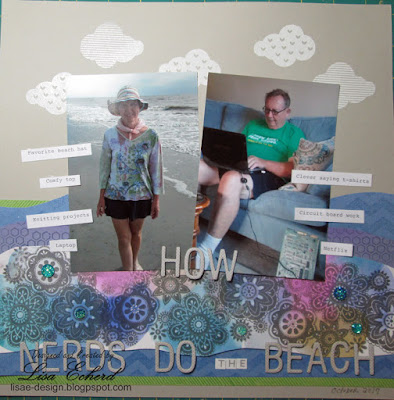 After years of going to the same place, I still take photos and still want to capture memories.  I just find it hard to come up with new twists on an old, beloved subject.  Last year, we traveled to Hilton Head in October.  With the days shorter and the possibility of some cool days, we knew we needed things to occupy ourselves besides beach walking, dining out and bicycling.  There was one day that was almost too cold to be outside.  I persevered but was glad I had some indoor activities as well.  Dh took along some work in the form of circuit board diagnostics.  I took my knitting and had some things to watch on-line when we weren't out.  These are typical activities for us at home.

Based on these photos, I thought we looked a little nerdish so herein lies the title for the page.  I do wish he had been wearing his super magnifying headband.  The stamping technique came from a Craftsy class I took during their free watching weekend called Radiant Stamping.  The class was designed for cardmaking. I'm using a couple of her techniques with a few of my own twists for scrapbooking.  I highly recommend the class as it shows you some new ways to look at stamps and inks.

Look closely to find the pattern paper.  Ha!  There is none!  This is an all cardstock page as well.

Here's the video for this layout:

Thanks for visiting today! 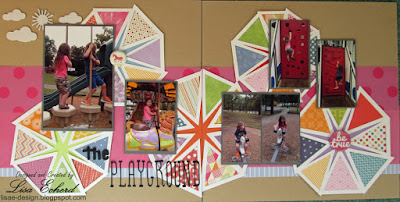 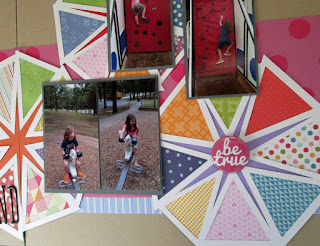 I don't do kid pages often so I really like to have some fun with them.  These photos taken at the park are full of colors so I raided my 6x6 and other scraps to make the triangles.  The page needed little embellishment as the die cut background served that purpose.  I was inspired by the beautiful layouts I see form Paige Taylor Evans Instagram feed.

Not finding a die cut that worked for me, I created my own.  You can use it too if you have a Silhouette.  Here's the Silhouette file I created for your personal use.

You may use for your personal projects.  This design may not be used for contest or design team submissions.  The design may not be sold or shared.  Credit to Lisa E Design is appreciated when posting projects made with this design on your blog or social media.

And here is the video:

Thanks for visiting today!

The best new show on Netflix

If you are a TV lover like me, we are blessed with plenty of good programming the last few years.  At our house, we don't have cable but we do have Netflix and recently added a subscription to Hulu. Between the over the air programming from broadcast networks, originals from subscription sites, British and other international programming and the older cable shows like Mad Men that we never saw the first go round, there is a ton of stuff from which to chose.

Yet, despite having a far longer list in my queue than I really have time to watch, I still look for things to add to keep a balance of drama and lighter programming.  One day I noticed this new show on Netflix and I had a few minutes so after perusing quickly the glowing user reviews, I decided to give it 15 minutes and see how it went.  I couldn't stop.  I watched the entire 40+ minute first episode without even leaving my chair for a break.

The show is Queer Eye. This is a remake of Bravo's Queer Eye for the Straight Guy from many years ago.  Having never had cable, I didn't know anything about the original other than it featured several gay guys.  I didn't know if it was a comedy or drama.  I certainly didn't know it was a reality, makeover show.  And that is a very good thing.  Because had I known, I probably would not have watched.

I really detest reality or as I call it UNreality TV. I'll watch makeover shows now and then particularly when we are on vacation and I have access to cable and the show "What Not to Wear" though I'm not sure why since I have quite a few criticisms of that show.

Most reality shows are so far from the real world, it isn't even a joke.  What's realistic about putting a bunch of attractive strangers on an island and making them do silly games to see who can survive?  Contest shows waste so much time not spent on the singing, dancing or whatever.  (Maybe that is where NBC got their idea for drawn out Olympics coverage).

Makeover shows are interesting again if you could actually get to the content.  Those shows though tell you at the beginning what they are going to do and then repeat that and a synopsis of what they have done at every commercial break.  Plus the useless interviews of how everyone feels about everything.

What I loved about Queer Eye is that is breaks those molds.  Five guys - all gay, each with different areas of specialty such as fashion, design, cooking, etc - spend 1 week making over another guy's life including his home, wardrobe, relationships, nutrition and hair.  Oh, the hair!  The guys they makeover are almost all straight but that is about all they have in common demographically.  They are single, married, young, old, with children, living with a roommate, living alone, living in the city or living in the suburbs.  The only thing they have in common is that they could all use a little help with their appearance and home design.

Oh and there is one other thing which is what gives this shows such rave reviews.  Each of these men let themselves go for a reason.  Tracking down that reason and helping them through it is a key element to the show. This happens naturally through conversation.

The interaction between the main cast and their fixer upper of the week often breaks down stereotypes and deals with current issues in a moderate, mature way.  It's these natural conversations that make the show really shine and also mean you ought to keep a box of tissues handy if you watch.

The show hasn't yet been renewed for Season 2 but if the cast is game I certainly think it will be.  It has received critical and viewer top reviews.  I did read that the would probably move from their base location of Atlanta to a midwestern city in a colder climate.  Apparently Hotlanta is just a bit warm for filming.

Wherever they end up, I look forward to the next season to see how they can transform a guy's wardrobe, nutrition, house, social interactions and well, life.
Posted by Lisa Echerd at 7:52 PM 1 comment: 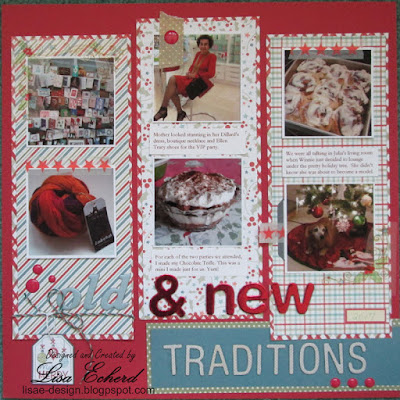 I really didn't think I had any holiday photos to scrap this year.  We went to several events but I didn't take photos for one reason or another.  I have many good memories and could always do a photo free page.

Then I went through my Instagram and found quite a few photos that represent the holiday season, the parties and the visiting we did.  One of them is of my Mother; the rest are food, a family pet, a door prize I won and a photo of the cards we received.  So this page is packed with memories, photos and hidden journaling.

The papers are from a warehouse box I bought from Fancy Pants. I haven't bought any scrapping stuff except a few inks in months, probably close to a year now.  Working through my stash and enjoying getting my pages completed just from what I have on hand is as rewarding as anticipating the UPS man's arrival - and a good deal cheaper.   I don't have a plan to use a specific amount of stuff.  I figure that eventually I'll be in the notion for some new things.

For now, here is a page made with warehouse box papers and some older stamp sets.  The video:

I have a kid page on my worktable right now.  It's definitely made from scraps with a little help from my Silhouette.  Thanks for visiting today!
Posted by Lisa Echerd at 7:37 AM 2 comments: