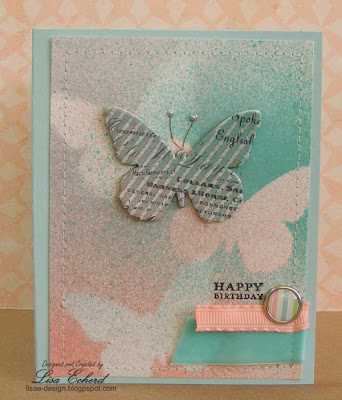 Today's card was a spin off from this card I made for my Mother's upcoming birthday. 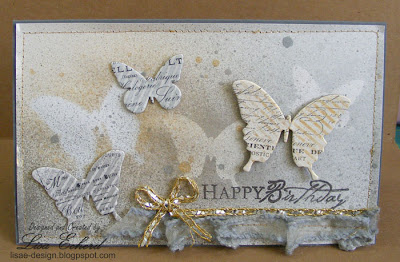 We did quite a bit of misting in card class last week so the paper in the bottom of my small misting box (shoe box) was a very pretty mix of colors.  But it also had some spray adhesive on it so I thought this time, I'd put down a fresh sheet of cardstock and after my misting would have some pretty paper to play with.

As I was working, I moved the butterflies around and decided I liked the misted sheet so much I'd use it for a background for Mother's card.  So all that inspired the card above with the single chipboard butterfly and the 3 background images. 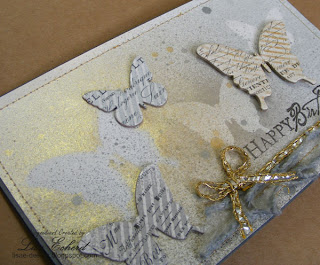 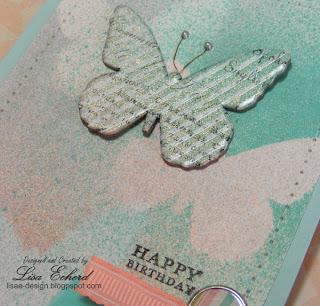 The butterfly is new from Heidi Swapp and I used her Color Shine mists also.  They are now available at Michaels as well as from the Two Peas store.  Mother's card features gold, tinsel and bronze.  The single butterfly card is misted with mint, peach and tinsel.

You can do this card with any time of mistable element - chipboard, canvas or paper.  You could cut butterflies on the Cameo or Cricut.

Here's the video to watch at YouTube or below:


Personally, I love these mists.  They have great coverage, beautiful colors and super shine.  My favorite thing is that they don't rub off at all once they are dry. And they dry fairly fast.

The butterflies are pretty but personally I'd rather have plain chipboard or other mediums to do my own resist before misting.  But that's just me.   There are several sizes in the package but I'd say a third at least are the smallest size. The last time I was at Michaels these were already sold out though they had plenty of mists.  There are other shaped elements available.

Thanks for watching!
Posted by Lisa Echerd at 8:05 AM