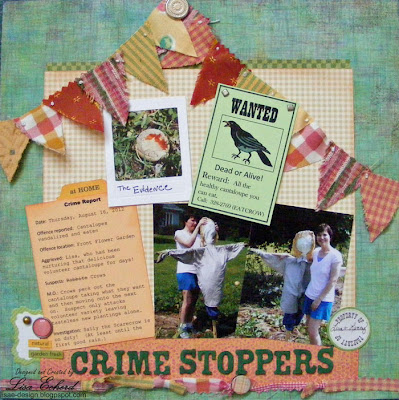 Every summer we get volunteer cantaloupes back from the first ones we ever planted.  They are delicious.  Last year, I had lost faith they were going to come up so I bought some plants and Lenny set them out. Well, of course, the volunteers returned and soon we were overrun with cantalopes.  The new ones were pretty but tasted awful so I was happy to have the old plants producing melons.

Apparently I wasn't the only one.  One particularly pretty melon had been growing and I was just waiting for it to get perfectly ripe checking it every day.  On the day I went to pick it, I discovered 'the evidence' in the photo. We had cantaloupe vandalism! 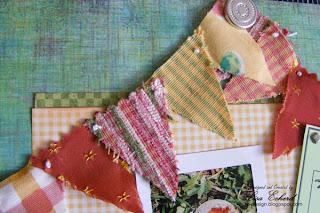 My husband thought it was rabbits but I hadn't seen a rabbit in our yard in ages.  (We have a cat.)  I suspected the crows and soon enough caught them in the act. So I constructed a scarecrow I named Sally.  I think I even posted her on my blog at the time.  However, Sally fell down on the job literally about a week into her duty after a nice rain.  The crows also didn't like the new variety.  They only ate the volunteer ones.

I never got anymore cantaloupe and even in winter we still have crows hanging around.  We are going to have to cover the melon patch next year, I guess.  Anyway, I had fun with the layout. 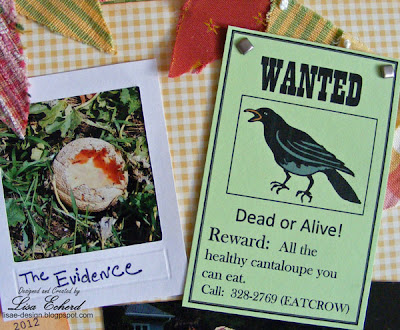 This is for Glitter Girl's challenge to use fabric.  My kind of challenge!  I have tons of discontinued fabric sample books.  I cut a few swatches and did the banner - my version of crime scene tape. 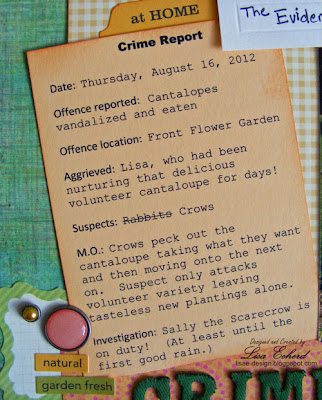 For the "Wanted" sign, I used Power Point and some of the built-in clip art.  The Thickers are Rockabye Mistables I painted green.

Thanks for stopping by.  If you know of a good way to discourage crows without firearms, let me know.  I'm anxious for tasty cantaloupes again.
Posted by Lisa Echerd at 4:15 PM