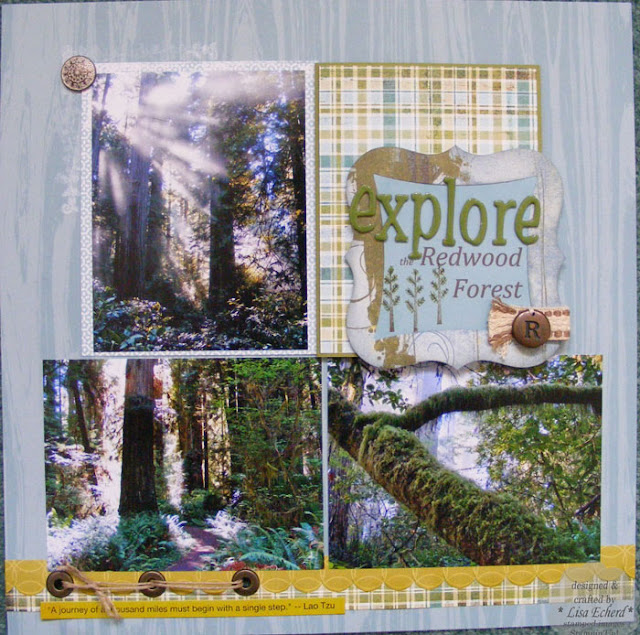 April's 4x6 Photo Love class (April 30 at Two Peas  class here) is about using 4 photos on a layout.  But where is the 4th photo? 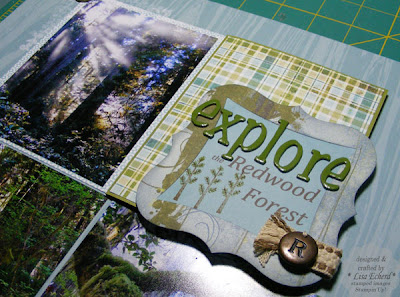 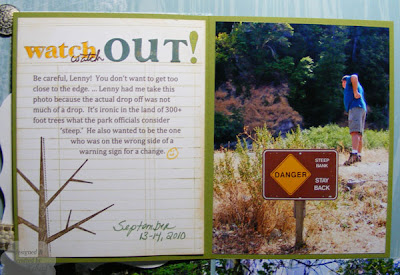 Hiding!  I haven't done this trick of hiding a photo in a long time.  Usually, I've used it because I had so many photos to display that you flipped one photo back to find another tucked underneath.  This time, based on Shimelle's layout, the top is for the title and a little pattern paper.  The inside shows the fourth photo and the journaling for the layout.  It's a nice way to keep things in threes but still use 4 photos.

My first three photos are serene pictures from our hiking in Redwood National Park.  Then inside you get Lenny looking over an embankment.  Turns out the warning sign was a bit severe as there wasn't much of a drop off.  Lenny just wanted me to take his photo 'breaking the rules.'  See, I'm the little Park Service rule breaker. I'm the one who goes past the signs on trails to peak over the edge.  Since he is afraid of heights, this drives him crazy - (I really thought the Grand Canyon was going to be too much for him).  I never get too close to the edge but it still bugs him.  So this time, he thought he was pushing the limits only to find it out it was just a ditch  :-) 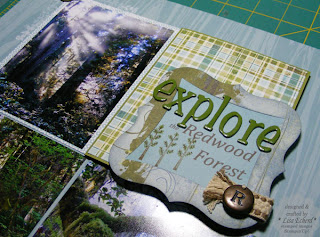 Grommets and brads seem to fit the rustic look of the layout.  I also got to use some older Basic Grey from my stash.  Good thing because some of the new Basic Grey is on its way here!  They released 4 new collections in the last few days!  The one I ordered was on my wish list from the CHA previews.

I have a companion layout to complete a double page spread for this that is still in progress.  I'm using the same papers but in a different arrangement.  Hopefully that will be up later in the week. I had a lot of fun this weekend just piddling around with these layouts in between painting, potting flowers and other outdoor tasks.

Thanks for visiting.  Stop by tomorrow for TIPsy Tuesday.  I'll have a card idea for you.

(On a completely unrelated note, if you are a "Good Wife" fan, I miswrote a few weeks ago that the season was over.  It isn't!  There is a new episode tomorrow night.)

Ingredients:  Stamps:  Season of Friendship and Trendy Trees by Stampin' Up!; Perspectives by Technique Tuesday; Ledger by Hero Arts
Ink:  River Rock and Soft Suede by Stampin' Up!
DSP and die cuts:  Campy Trails by American Crafts; Oliver and Periphery by Basic Grey
Brads and Grommets:  Stampin' Up!
Posted by Lisa Echerd at 9:58 AM