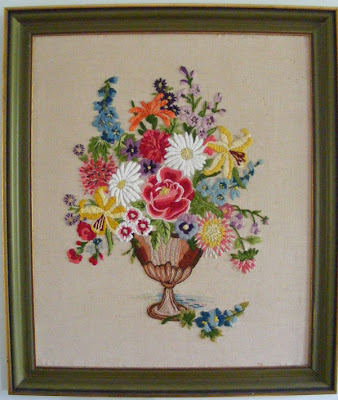 Who inspired you toward a crafty hobby?  Or did you pick it up on your own?  Have you always been surrounded by family and friends who create things with their hands?  Perhaps one or two people influenced you.
That question is the first phase of Two Peas in a Bucket’s latest event called Connecting with Creativity. 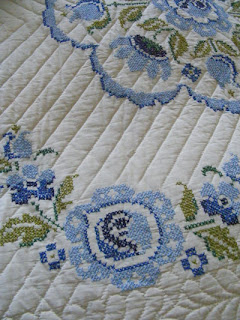 When I think of that question the first people that come to mind are my mother’s sisters and two very good friends.  And while I started creating at a very young age with the help of these wonderful people, my exposure to handmade items goes back to before I could even walk and talk much less hold a crochet hook or a needle.

When I was very young, I can remember my mother cross stitching the designs on what became her bedspread.  I remember going with her to take the completed cross stitch top to an older lady’s home where it would be intricately hand quilted.
There were other projects mother did including some decoupage plaques where she put dozens and dozens of coats of polyurethane over the surface standing between each one.  I don’t recall seeing her make the crewel embroidery picture shown above but I do know that she made it and it was in our house when I was growing up.  About four years ago mother and I were going through some things in storage and I came across this as well as a needlepoint picture that she did.  This one now hangs over the desk in my living room.  The decoupage Four Seasons pictures are displayed in her hallway.
My mother’s creativity was redirected towards the business that she and my father started when I was four.  My father started by framing pictures –he framed the embroidery that she did and later my early efforts at embroidering.  They soon expanded into offering draperies, wallpaper, and carpet.  Mother helped customers select the furnishings for their home.  She also had a young child, my mother in law, and parents who all needed her time.  So the time for embroidery and other projects just disappeared.
Now that my mother has retired she has taken up gardening.  She uses her creative energy to arrange her plants and create a beautiful, inspiring yard.  I wish I had her energy as well as her green thumb!
Now that I think about it I’m sure my mother’s creativity was influenced by projects that were done in her home.  My grandfather was a cabinetmaker.  He delighted in working out how he was going to make something.  She’s fond of telling me how he could do anything.  He and my Dad's father built my parents home they still live in today.  My grandmother quilted and was a wonderful cook and gardener herself.
So when I first think about it, it’s a little harder to connect the dots because we all do different kinds of crafts.  Yet the desire and the ability to create beautiful surroundings is a thread woven through my family for generations.
Follow this link to read stories from other bloggers on who inspired them.  Connecting with Creativity


Thanks for visiting!
Posted by Lisa Echerd at 9:11 PM

Email ThisBlogThis!Share to TwitterShare to FacebookShare to Pinterest
Labels: Fun Stuff, Want to scrapbook this