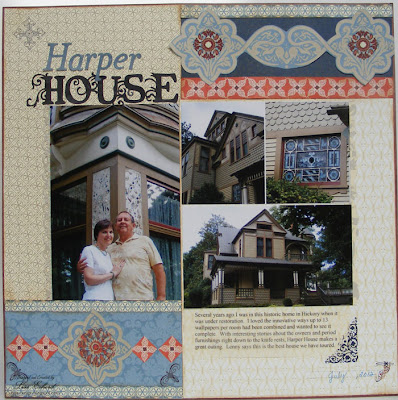 On a date day a few weeks ago, we visited the Harper House, a local historical site.  Apparently it is a secret treasure as no one around here I've mentioned it to had ever heard of this pretty home.  The house was built in the 1800's and has been restored to its Victorian grandeur.  Most Victorian era homes I've seen have elaborate plaster or carved ceilings.  However, apparently another way homes in this time period were decorated was with wallpaper - lots of wallpaper.

I'd seen this home when it was under renovation about 8 years ago and I knew they were doing a fabulous job so I was excited to see it again.  Unfortunately, they don't allow any photos of the inside or have any posted on their own website.  Each room has all the ceiling and most of the walls covered in a variety of wallpapers.  One room has 13 papers!  None of the original furniture was left but they have brought in pieces from the time period right down to the knife rests on the dining table.  I'd never seen a knife rest either.

We were given a guided tour and learned about the homes occupants including a woman who was married 3 times - for love, for money and for the heck of it.  She was smart enough to get a pre-nup on the last one as he was a real spendthrift.  This was about 1910 so she was definitely ahead of her time.

The top floor is devoted to what was a room for partying and dancing during prohibition.  There are silhouettes on the wall of the frequent guests.  They didn't know who these people were so the Historical Society published the silhouettes in the local newspapers during restoration and were able to get identities from many of the descendants. 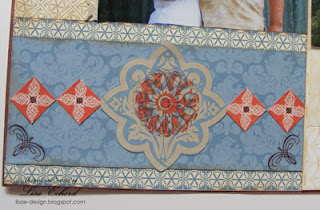 For the page, I wanted to give the impression of the various wallpaper designs.  I've used about 10 papers I think plus quite a few Basic Grey rub-ons.  Stickers for the title keep this an uncharacteristically flat page.

Thanks for stopping by today!  Tomorrow I have a quick recycling tip for you.
Posted by Lisa Echerd at 6:12 AM