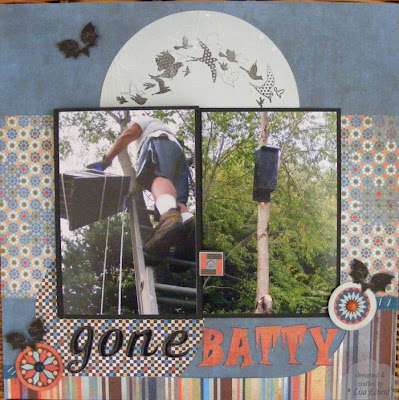 I thought we were going to go literally batty trying to figure out the best way to put up the bat house - or as my husband called it - the Bat Palace.  We have bats occupying our chimney that we want to evict.  We don't want them to leave the premises as they are the most marvelous mosquito control imaginable  I can walk out into my yard even in the evening wearing shorts and short sleeves and not get bit!  It is amazing.  OK, that may not sound like a big deal.  But really, most summer months I feel a prison of my house because the bugs just eat me up outdoors.  Not this year.  So we want the bats to move, not leave.  Thus the creation of a bat house. 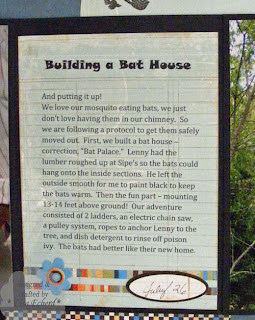 The house is supposed to go up in July so they get used to it and then we evict the bats in the fall after their babies are ready to fly.  Building the house was remarkably quick and easy.  Putting it up was another matter.

After clearing the area around the tree my husband had selected and cutting off the lower branches, he set up the tallest A frame ladder we had and worked his way up.  He had already tied ropes around the bat house and affixed a pulley system so he could haul it up the tree, I would hold the rope and then he would put the screws in.  Sounds like a plan.  Well, the first ladder just wasn't high enough; for some reason he didn't cut the branches off flush with the trunk so the box wouldn't lay flat, and I am a weakling who wasn't very good at holding onto the box or the ladder for that matter.  There was one terrifying moment when I thought he was coming down - the hard way.

After lunch, we got a bigger ladder, longer screws and a better plan.  The Bat House was soon installed.  When I blogged about this the first time, I mentioned the poison ivy I found at the end of the process. I did end up with a little on my arm but very little, thank goodness. 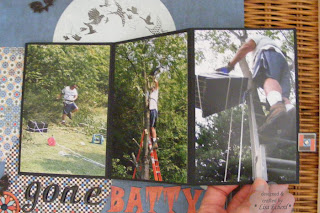 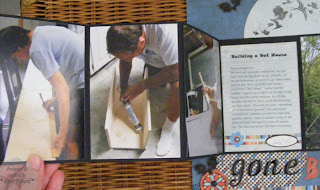 So now for the layout of this little adventure...It's 7 photos for July's 4x6 Photo Love class.  Shimelle shows how to create an accordion photo holder in her video here - Class .

I stamped the bats on gray cardstock and cut them out for embellishment.

The font for Batty is Snap ITC.  I think this was part of Windows 7.  Isn't it the perfect font?  the T's sort of look like bats.  I used SCAL software and my Cricut to make the letters.

So that is the record of our latest at home adventure.  When I mentioned that I hoped the bats liked their new house, Lenny's response was "They'd better."

Ingredients:  DSP:  background from Creative memories, light blue from Fancy Pants, all other paper is Marrakesh from Basic Grey
Thickers:  Blackberry by American Crafts
Stamps:  Birds Galore and a seasonal set by Inkadinkado
Ink:  Black pigment ink from Colorbox
Posted by Lisa Echerd at 8:39 AM