At the beginning of the year I told you about my New Year’s resolution.  It was to Get Moving.
Also, just before the end of the year I signed up for Shimelle’s class called Blogging For Scrapbookers.  Shimelle’s classes can be taken at any time and I was doing this several months maybe a year after the original class had run.  I got through about half of the class before the holidays seemed to swallow my time.  Fortunately, she is offering a follow-up class and as a precedent is rerunning Blogging for Scrapbookers.  We’re receiving the prompts each day so I can do things that I missed before or in this case give you an update.  This is day six of the class and the topic was sharing a goal.  I thought it would be a good time to update on the goal I shared in January.
So what is Get Moving?  My resolution was to do something every day to get me off the couch and out from the computer.  It was to increase my activity level and eventually improve my overall health.  I’m really lousy at exercise goals so I thought making this just to do something without having to say do so many sit-ups, or walk X amount of miles, or join a gym would be a lot easier and much more likely to succeed.  And I might get weeds pulled and my house cleaner in the process, what a deal!
One of the other things I told myself was that I would not let aches and pains interfere with my commitment.  If my knees hurt and I couldn’t walk, I would do something else.  I have made some progress.  I’ve kept a log and I actually recorded quite a lot of activities February.  I did OK in January and was pleased to see that I was improving as the year when along.  Then came March; and my commitment wavered greatly.
Now I will say that I’ve done quite a bit of walking in March as the weather has got warmer.  The recurring issue are those darned aches and pains.  I have an underlying health condition that I’ve had since I was a teenager that always interferes with my activity level.  And of course is I get older and picking up more pesky little problems which are sometimes short term and often become minor chronic issues.  Several weeks ago the shoulder pain that I was experiencing last summer came back.  The wasn’t as bad as before but it was certainly more persistent.  In fact right now I am using Windows speech recognition software to dictate to my computer rather than type.
So the gist of all this is that I have lots of excuses and I’m working hard to overcome or work around them.  I’m getting some help with my physical problems.  I still have a goal of being stronger and ultimately developing less new aches and pains. 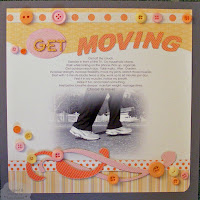 Another thing about my resolution is simply reminding myself.  I made a scrapbook page and posted it where I would see it every day but apparently that isn’t enough. Inspiration Page Last night when I peeked ahead to see what today’s prompt would be the reminded me of my resolution.  I had a few extra minutes so I did some extra housework and really got myself moving and got cleaner floors, too.
Maybe I need to stick post-it notes all over the house!  There’s still plenty of things I can do it’s a matter of constant commitment.
I was watching 60 Minutes last night - after my cleaning spurt.  Andy Rooney was going on about things everyone tells you are good for you that often contradict one another.  He said he was waiting for the study that tells you ice cream is good for you.  Me, too!  That would be one healthy commitment I wouldn't need to be reminded of.
Posted by Lisa Echerd at 10:03 AM