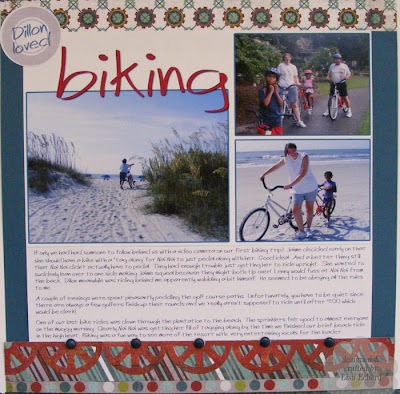 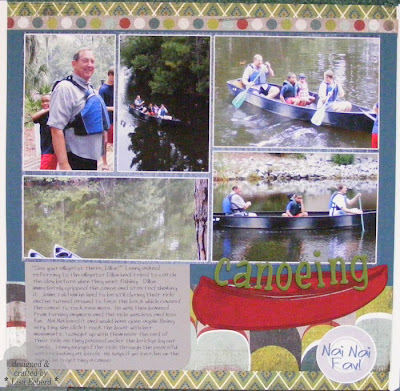 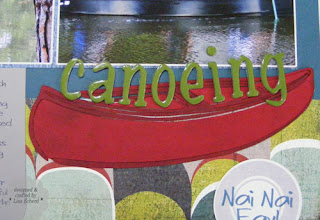 The funniest part of the biking story is how Nai Nai wanted to hang off one side and then the other of her tag-a-long bike.  She sent Jaime squealing and nearly careening with her off balance movements.
One of the photos for the canoeing page shows an alligator head in the water.  Dillon thought it was fun to try to 'catch' the alligator with a fishing pole.  He didn't think it was much fun to ride along beside one in a canoe.  He also had a terrible time sitting still and after being fussed at several times for moving around, he had to just sit still for the remainder of the ride.  One photo shows him very tired of the whole thing. Nai Nai on the other hand is so tiny that she could wiggle all she wanted in the canoe and nobody was bothered.  She would have ridden again given the chance.
Thanks for visiting today.
Ingredients:  Designer Paper:  Oliver from Basic Grey
Cardstock:  Cherry Cobbler, Going Gray, Not Quite Navy from Stampin' Up!
Chipboard Letters:  Nutmeg from American Crafts
Font:  Just Act Casual from dafont.com
Brads:  Marachesh collection from Basic Grey
Posted by Lisa Echerd at 8:03 AM