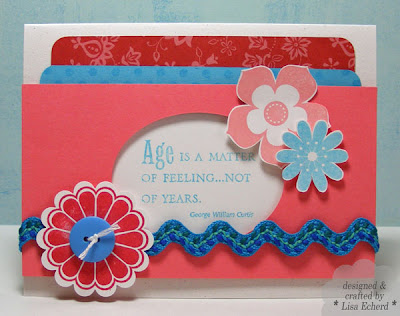 This is my second go at the sketch challenge for this week at Splitcoaststampers.  I have to say, I'm still not in love with it although it does look better to me this morning than it did at 9:30 last night :-)  I did turn the oval on it's side so maybe that is part of the issue.

However, I do love the color combo of Turquoise, Ruby Red and Cameo Coral. The last two are being retired.  Ruby Red so often matches DSP from other companies I'm sad to see it leave.  And I've always loved Cameo Coral though strangely I don't use it that often.  Fortunately, Papertrey Ink has a similar color.

Project Notes:
Thanks for dropping by!