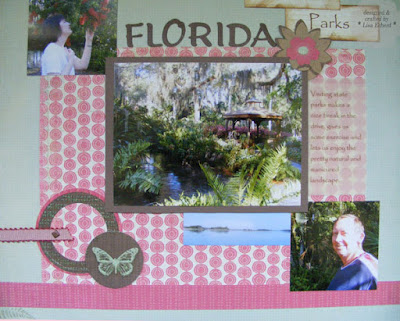 Wow!  Where has this week gone?  Unfortunately, I lost most of Monday because of a minor workplace accident.  Note to self:  Don't store an unused iron on a high shelf.  I have a purple finger nail and a heavy bruise on one arm.  At least my finger quit hurting by Tuesday so I could get some work done.  I couldn't even type anything with an "s", "w" or "x" on Monday.  So crafting time has been sparse until today.  I've got some time set aside while I await materials for future window treatment jobs.

I did finish this layout late yesterday.  It is the other two-pager from Florida. 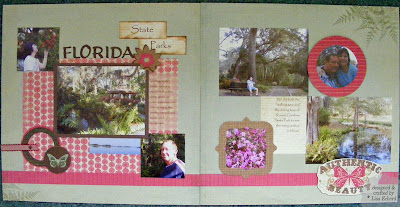 Project Notes:
When we are going to be traveling by car through a state, I usually look up the state's park system on-line before we leave and have an idea of places we might stop for a break.  This has proven to be a great way to see the scenery and unwind while traveling.  I've definitely become less and less of  a road trip kind of traveler.   One of the parks shown here was just south of St. Augustine and took up some of our time on the way to the space center.  The other was Ravine Gardens where the azaleas were in bloom.  I don't think we spent more than an hour at either but still the hour was very refreshing.

Ingredients:  Stamps:  Summer Leaves by Stampendous
Ink:  Mellow Moss by Stampin' Up!; Vintage Photo by Ranger for distressing
DSP: Mia by Crate Paper; a little Pink Paislee for the journaling
Ribbon by Basic Grey
Font:  Papyrus
Posted by Lisa Echerd at 8:33 AM