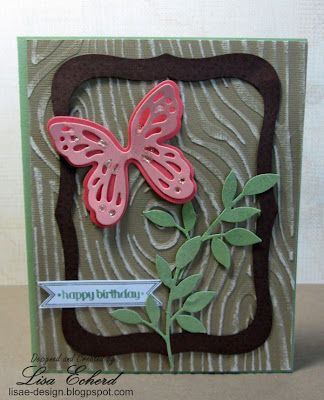 I broke one of my long time vows this past weekend.  I spent the 4th of July somewhere other than home (which is the most typical) or Gatlinburg, TN.  I went to visit my friend Karen in Greenville, NC and had a marvelous time visiting and crafting!

When I was growing up, my parents had a retail business and always closed for the 4th of July week because that was when everyone in this area was off.  It is still a common practice among small businesses and factories.  So that is when we traveled.  I've been to Disney World on the day of the 4th, Amish country in Pennsylvania,  Washington, D.C. and various relatives from Seattle to Florida by plane or crowded highways.  By the time I was 21 and moving out, I'd had enough.  I vowed the only place I would go was Gatlinburg, if that, because I could park and walk everywhere.  Except for one business trip requiring a 4th of July flight, I've held up the vow.  I'm glad though that it broke this year as we had such fun.  We did very traditional 4th of July activities that I'm sure will be scrapbooked later on. 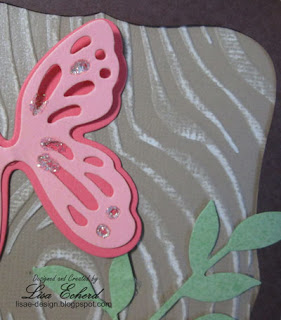 For now, here are a couple of the cards I made using Karen's Big Shot and embossing folders.  The paper for the card is Stampin' Up!'s new Baked Brown Sugar color in their Coredinations cardstock. Coredinations has a textured finish and a core of a lighter shade of the top color.  You can emboss it and then sand the surface for a pretty effect.  As far as I can tell, that is the main technique for this paper.  So I would recommend it if you have an embossing system.  If not, it is a bit overpriced.  And why they offer this in only 12x12 when that is the primary feature requiring you to trim the paper down, I'm not quite sure.  Maybe there is something, I'm missing here.

Anyway, it makes a nice finish and the new In Colors are all lovely. I've covered them at the beginning of this shopping video along with the new Smokey Slate as it compares to the old, much missed, Going Gray.

For this card, I used white craft ink on the embossing folder before running it through with a piece of Crumb Cake (kraft) cardstock. 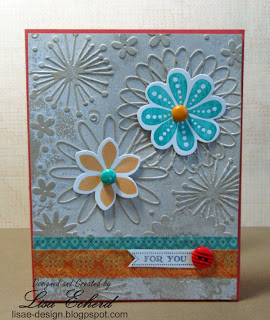 Now a trip down east, would not be complete without a stop at Archivers and the rounds of Michaels, JoAnn's (which we don't have near me) and AC Moore.  So I put together a little shopping video that includes a bit of Stampin' Up! at the beginning.


This will be the last shopping video for awhile as I've definitely exhausted my budget in the last few weeks.  CHA which showcases the new scrapbooking offerings will be in late July and lots of new products will surely be available soon after.  Maybe my pocketbook will have recovered by August :-)

There will be lots of other videos though.  So come back soon for another sketch and scrapbook page video this week.
Posted by Lisa Echerd at 11:20 AM