The boy, the raft and the Adventure 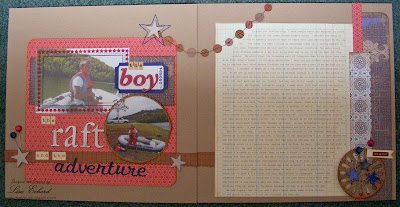 Dillon and Lenny are already plotting their fishing expeditions for this summer. Thought I'd better wrap up my pages from last summer. I did this one earlier in the year and posted here: I wanted to continue with the same products and style. 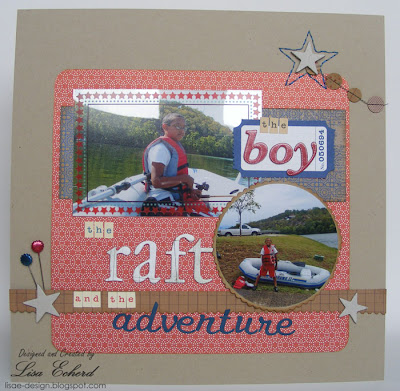 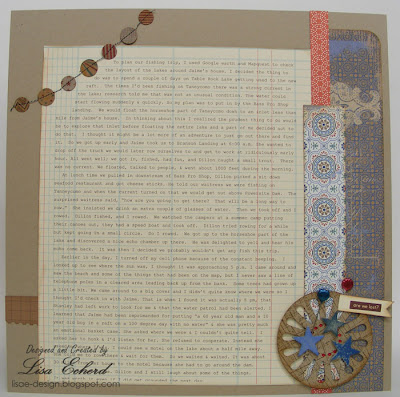 Last summer, Lenny ordered a raft for him and Dillon to fish from.  We were all dubious of this activity.  There was no motor.  They were going to row.  On the first day out, they rowed around and fished on a very tranquil lake, no fish, no big deal.  Then came the 2nd day...

I needed Lenny to capture the real story .  There are many angles to this story. My stepdaughter might tell it differently. I was brought into the adventure about 7 p.m. on the infamous 100 degree day when Lenny had not arrived home and had not called.  (I was 900 miles away and fairly useless.)  Actually Jaime called me at 6:00 to know if I'd heard from her dad.  Neither of us were that concerned at that point as 'we both know Dad.'  But as the day drew shorter, the worry grew at least for those of us on dry land.  The two on the lake didn't seem to have a care in the world.

To plan our fishing trip, I used Google earth and Mapquest to check the layout of the lakes around Jaime’s house. I decided the thing to do was to spend a couple of days on Table Rock Lake getting used to the new raft.  The times I’d been fishing on Taneycomo there was a strong current in the lake; research told me that was not an unusual condition. The water could start flowing suddenly & quickly. So my plan was to put in by the Bass Pro Shop landing.  We would float the horseshoe part of Taneycomo down to an inlet less than mile from Jaime’s house.  In thinking about this I realized the prudent thing to do would be to explore that inlet before floating the entire lake and a part of me decided not to do that.  I thought it might be a lot more of an adventure to just go out there and find it.  So we got up early and Jaime took us to Branson Landing at 6:00 a.m. She wanted to drop off the truck we would later row ourselves to and get to work at ridiculously early hour. All went well; we got in, fished, had fun, and Dillon caught a small trout.  There was no current. We floated, talked to people, & went about 1000 feet during the morning.
At lunch time we pulled in downstream of Bass Pro Shop, Dillon picked a sit down seafood restaurant and got cheese sticks. He told our waitress we were fishing on Tanneycomo and when the current turned on that we would get out above Powersite Dam.  The surprised waitress said, “how are you going to get there?  That will be a long way to row.”  She insisted we drink an extra couple of glasses of water.  Then we took off and I rowed.  Dillon fished, and I rowed.  We watched the campers at a summer camp putting their canoes out, they had a speed boat and took off.  Dillon tried rowing for a while but kept going in a small circle.  So I rowed.  We got up to the horseshoe part of the lake and discovered a nice echo chamber up there.  He was delighted to yell and hear his echo come back.  It was then I decided we probably wouldn’t get any fish this trip.
Earlier in the day, I turned off my cell phone because of the constant beeping.  I looked up to see where the sun was, I thought it was approaching 5 p.m. I came around and saw the beach and some of the things that had been on the map, but I never saw a line of telephone poles in a cleared area leading back up from the bank.  Some trees had grown up a little bit. We came around to a big cover and I didn’t quite know where we were so I thought I’d check in with Jaime. That is when I found it was actually 8 pm, that Stanley had left work to look for me and that the water patrol had been alerted. I learned that Jaime had been reprimanded for putting “a 60 year old man and a 10 year old boy in a raft on a 100 degree day with no water” and she was pretty much an emotional basket case. She asked where we were and I couldn’t quite tell.  I asked her to honk and I’d listen for her. She refused to cooperate. Instead she asked me where I was. I could see a motel on the lake about a half mile away. She told me to row there & wait for them.  So we waited and waited. It was about from her house to the motel because she had to go around the dam.
We had a good time. Dillon and I still laugh about some of the things.
It was worth it even if I did get grounded the next day.


So Lenny and Dillon took a day off from fishing and more importantly the raft.  Then they went back to fishing.  They didn't catch much but certainly had fun.  And this year a motor has already been ordered for the raft.

One other funny note:  Lenny was out there for 2 weeks and went to see his sister a couple of hours away over the middle weekend.  He took the raft out of his truck to leave it at my stepdaughter's house while he was going to be gone. Dillon told him, "I think you should take the raft with you, Grampa."

Dillon replied, "It might spring a leak while you are gone."  (No damage came to the raft then - well, the next week there was a twister but that is another story...) 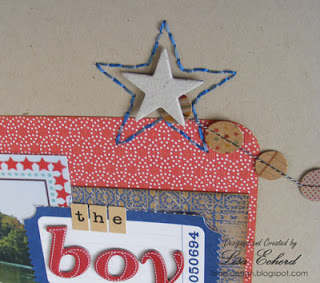 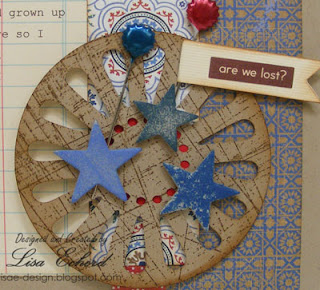 I couldn't resist the 'are we lost?' sticker from October Afternoon's Campfire collection.  To do the stitching around the star, I cut a star out with the Cricut and used it as a pattern for marking my stitching lines.