Coloring in front of the TV 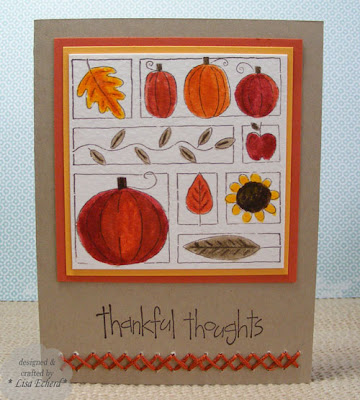 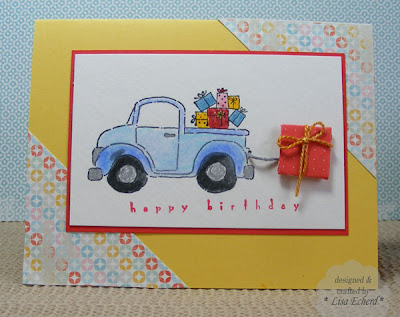 Here I am again using the Loads of Love stamp.  I do love this little truck.  Lately, I've been looking for things I can color when watching the news in the evening.  The world must be a boring place if the lead story is a debate between Dr. Oz and another reporter about apple juice - seriously, the lead story one day this week!  Anyway with mesmerizing content like that having a little something to do while watching helps.

I'm going to have to look for more stamps that I can color.  I tried the digi route however when I print them, the ink smears when coloring.  I don't plan to invest in Copics so I'm using my Stampin' Up! markers.  Anyone know of paper you can print digital images on and then color with water based markers?

I did get this wonderful set used on the top card second hand and I love it for Thanksgiving or other fall cards.

Speaking of television, the fall TV season starts this week and I'm pleased as the days are getting shorter and the nights a bit boring.  I usually watch only one show a night or maybe two half hour comedies but they do break up the evening.  Here are the returning shows I'm looking forward to:


Sunday - The Good Wife which is no doubt the best drama on television.  I hope it does great in the new time slot.  There is a catch up episode on-line though it doesn't cover nearly all that happened and doesn't really talk much about the one character that everyone does talk about - Kalinda.  All the characters are interesting and have tons of depth to keep this one going a long time.

Desperate Housewives are doing their final season and I'll probably catch it via the Internet on Tuesdays when there is nothing on in Primetime yet again.

Monday - Mike and Molly.  I was very surprised to like this show. It is more about their relationship than their weight though of course that does spark lots of jokes.  It is the supporting cast that often makes or breaks a sitcom and this is no exception.  The sister is hilarious!

Tuesday - as I said, nothing here except perhaps the new show Unforgettable but it doesn't come on until 10.

Wednesday - Modern Family!  What else?  TV's best sitcom.  My favorite of all time is Frasier and this one just might top it.

Thursday - Big Bang Theory - my husband's favorite sitcom.  I thought the addition of the girlfriends was a mistake but I was so wrong.  Bernadette, Amy and Pria added much needed friction and material to keep the character's growing.

What are your TV picks for this fall?