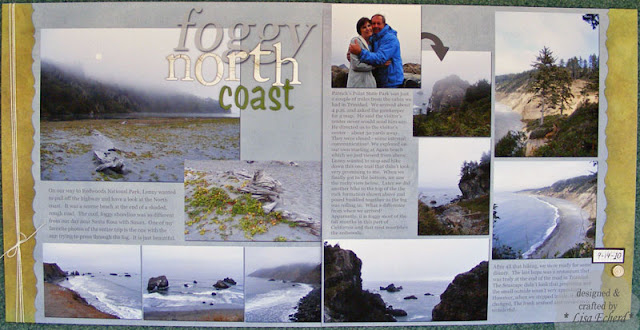 What a contrast!  Last week I shared a layout of the sunny California coast.  I used bright blue and soft yellow colors to pick up the colors of the sky and our clothing.  While I know that was an atypical day for them, it created quite a contrast for us.

In this layout we have moved further north to just above Trinidad and the coast closest to Redwood National Park.  Apparently the climate in this part of California is often foggy especially in the late summer and fall.  The fog provides provides a mist that nourishes redwoods.  We got just a little glimpse of a clear coast when we went to one of the state parks later in the afternoon.  However we weren’t there very long until the fog rolled right in.
It really is beautiful just in a different way than the sunny day we spent on a Sonoma County beach. 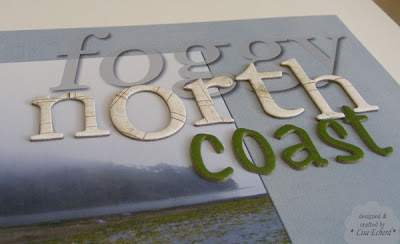 Project notes:
I really do try to get a lot of our location photos scrapbooked.  If I put them in another photo album, we would never look at them.  Which of course reminds me that there are some photos from our early trips that have never been properly scrapbooked.   I guess we never 'catch up.'

Thanks for visiting today!
Ingredients: digital background by  from two peas in a bucket
Lettering: Oliver chip stickers by Basic grey; nutmeg Thickers by an American Crafts
DSP: Penny Black
Posted by Lisa Echerd at 8:02 PM