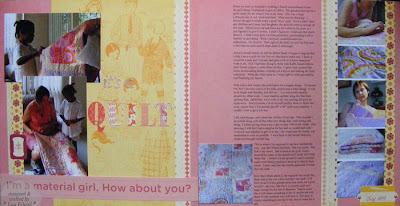 Not all scrapbooking is about the most joyous occasions.  I think it important to record what really happens even if it isn't all like you expected it to be.  One of the "Joys of Scrapbooking" is that it can be therapeutic and eye opening to write about an experience.  That is what happened when I did the pages for the quilt I made as a gift this summer.  I could have just done a one page layout with some photos of the quilt and how I rushed to complete it, but that isn't really the story, or the lesson.

When we went to Amanda’s wedding, I finally remembered to take the quilt along I’d planned to give to Dillon. My grandmother had two quilts made for me when I was in my teens. One was a large LeMoyne star in red, white and blue! What was she thinking? I always thought it would make a good ‘boys’ quilt. Since I didn’t have any children and Lenny had daughters, the quilt has been in storage all this time. Dillon loves red and these are the colors in his room so I just figured I’d give it to him. I didn’t figure he would care that much about it. I didn’t even give it to him personally, just handing it off to Stanley to pass along. Well, I seriously underestimated his enthusiasm. He loved it. That night at the hotel, he and Nai Nai built a fort with his quilt and he slept under it each night.

About a month before we left for Hilton Head, it began to nag me that I didn’t have a quilt for Nai Nai so I decided to make one. I knew it would be a rush and I already had quite a bit of window treatment work to do. Still I had been dying to work with Kaffe Fassett fabrics and I found a place to order them on-line. I spent what seemed like hours downloading photos, working out a layout and making the final selections. When the order came in, I went right to work prewashing and finalizing my layout.


With only a few weeks, the quilt had to be a simple design. I’d chosen Nai Nai’s favorite colors of hot pink, purple and a little orange. It was to be bright and cheerful, just like her. I cut and sewed steadily around my other work. I even machine quilted using the free form quilting foot. Definitely, not a work of art, the quilting did give me experience. And of course, I’d cut myself terribly short on fabric but soon, sooner than I’d expected, the 60” x 80” quilt was complete. I couldn’t wait to give it to her.


I did wait though, until about the 3rd day of our trip. This shouldn’t be rushed along with all the other new things they were seeing and doing. I’d been giving them a toy a day to play with in the condo. One morning, I told her I had a surprise for her and we would wait until everyone was together to give it to her. She made sure the family was assembled as soon as possible. I went back to the master bedroom closet and brought out the bag.


This is where I’m supposed to say how excited she was – just like Dillon had been. She was polite. She didn’t say much. She looked at the quilt, Jaime showed her some of the details and I could tell it had fallen flat. I folded it back up and it wasn’t touched again until Stanley packed it back up to take to their house. Lenny said that she would appreciate it when she was older.


Now that I think about it, her reaction was much like mine was to the red, white and blue star quilt. (I’d have loved it if my grandmother had made me a quilt herself.) Anyway, Nai Nai’s is a pretty quilt and large enough for her bed in Branson. Maybe some day it will mean something to her or maybe she will share it with someone who will love it. For now, it means something to me that I was able to make her a gift.


It wasn't until I was writing this journaling that I realized the similarity between Nai Nai's reaction to my quilt and my reaction to the one my grandmother had paid to have made for me.  Both were given out of love and both were received with only polite thanks though for different reasons.  It isn't surprising that Nai Nai was expecting a toy rather than something she hardly needed in the middle of summer.

This also reminded me of my lukewarm reaction to my Aunt Clara's Christmas gifts when I was a child.  Each year a package would arrive in the mail from the west coast. Mother would not let me open it until Christmas and I knew it would be clothes.  But each year I secretly hoped it would be a doll or some kind of toy.  Those clothes were much appreciated by my Mother and fortunately my aunt never knew that I was just a bit disappointed.  Now I know that my reaction wasn't all that important anyway.  The clothes were as much for Mother as they were for me providing something extra in those early years when there wasn't a lot of extra money.  And my aunt must have loved shopping for them.  You see, she lost her own daughter to disease and missed having a little girl to shop for.  I only regret that I never thanked her properly for her gifts.

I have noticed over the years that some things I make really go over big and others, often the ones that took the most effort, are met with just a 'thanks.'  It doesn't matter that much as long as you give out of love.

Ingredients:  DSP:  Cosmo Cricket Material Girl, My Mind's Eye for background
Quilt is cut with the Cricut from various DSP scraps
Posted by Lisa Echerd at 7:10 AM