Thankful for You booklet 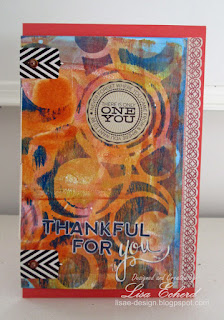 Several weeks ago I wrote my mother a letter to say some of the things I always wanted her to know that I felt about her.  I even made some discoveries as I was writing.

This was prompted because I didn't say everything I wanted to to my father before he died.  As far as I know, Mother and I are both in good health.  I didn't want to wait until one of us wasn't or something happened and I missed my chance.  I was going to say these things out loud to her and someone suggested I put it in writing instead.  I think that was wise as she has something she can read again if she wants.  If her memory fails her, she will always have the words written down.  None of us remember that much of what we hear anyway.

The video shares a bit of this idea and the process I used for making this card which is sort of a booklet. It is only 2 pages inside front and back but you can pack in a lot of text in those two pages.  You can use this idea for anything you want to capture and share.

Thanks for watching! I'm very thankful for my viewers and all the wonderful feedback received.