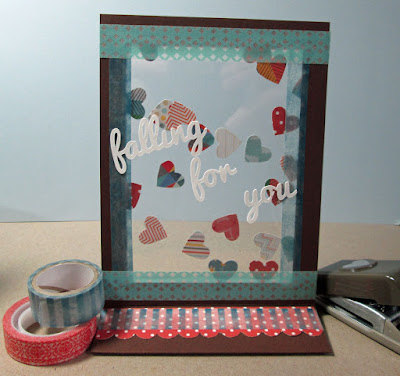 I don't do a lot of fancy fold cards.  This idea just came to me one evening.  What if I put punched pieces in between layers of acetate and created a window.  Then I decided it would be cool if I could make the window stand up on its own.  After a few different tries, I created this card which I'll give to my hubby for Valentine's Day.

This is no a shaker card, the hearts just hang there between the clear acetate.  I used old transparency film.

I think the concept would work really well for small punched snowflakes.  I might do some of these for Christmas next year.  We've had one snow.  I can't say we won't have more bad weather but the days are getting longer, the grass is greening up so most people are at least looking toward spring.

Here's the video for the card.


Thanks for watching!
Posted by Lisa Echerd at 6:15 PM