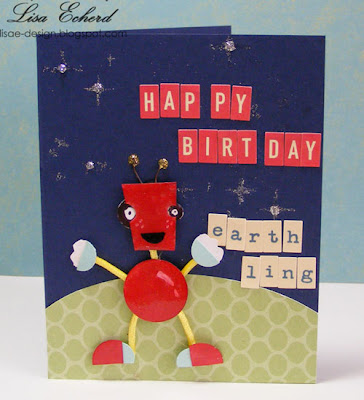 I CASEd this card from the January Cricut magazine.  Isn't he a cute little alien?  Good thing I had an example as I wouldn't have had a clue how to make one.  Their version was cut with a cartridge.  I did mine with punches and hand cutting.  To add some extra dimension and shine, I went over many of the pieces with a coat of Crystal Effects (like Glossy Accents but from Stampin' Up!).  The legs and arms are some yellow trim. 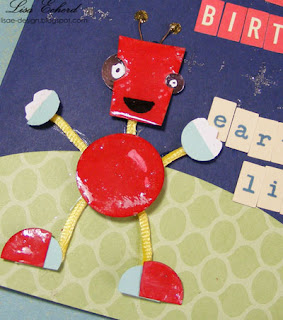 Their version had something about the birthday being 'out of this world.'  I saved that for the inside and used a star background made by stamping and embossing a few stars with silver embossing powder.  October Afternoon stickers finished off my message.

The card went to Dillon for his 11th birthday.  He will soon be too old (maybe he already is?) for such cards so I'll have to enjoy making things like this while I can.

Oh and we have to brag on Dillon.  He placed 2nd in the Physical Science competition in his region of Arkansas.  He was the first one from his school to ever place in this competition.  His entry was a comparison of the strength of homemade glue versus store-bought glue under various degrees of pressure.  He had to measure and record the pressure.

(I would share pictures but my stepdaughter didn't take her camera!  I'm beginning to lighten up on my parents for not taking photos of me as a child.)

Congratulations, Dillon!
Posted by Lisa Echerd at 7:30 AM