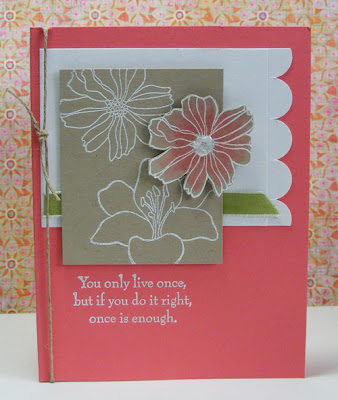 Stampin' Up!'s Idea Book and Catalog for 2011-12 is out. I CASEd this card (almost identically) using the Fifth Avenue Floral set which is still available in the new catalog.  This year's CAT was not the massive change of last year when all the color families changed along with lots of other things.  Apparently some of last years' changes were not embraced as they have changed again.  Here's my take on the new catalog:


The catalog should be on-line July 1st or check with your demo about getting one.  They are great idea books as well as for purchasing product.
The card above is almost entirely Stampin' Up product except for the cardstock.  I think the one in the catalog is a new In Color.  I matched it pretty closely with Berry Sorbet from Papertrey Ink.
Ingredients:  Fifth Avenue Floral
Cardstock:  Berry Sorbet by Papertrey Ink; Crumb Cake by SU!
Liquid Pearls by Ranger
Ribbon:  Old Olive
Posted by Lisa Echerd at 7:26 AM