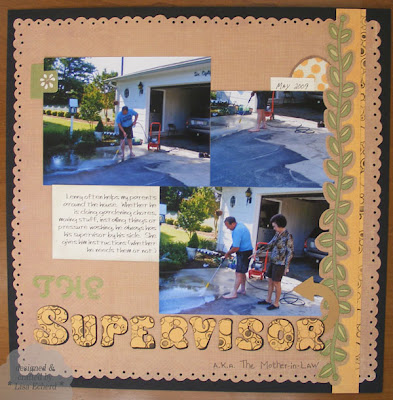 My husband has a Mother-in-law and he wouldn’t take anything in the world for her. They kid one another. He is always up for her projects. She likes to bring him little treats or take him to lunch when he has been working for her. Mother is always upbeat and is very active. (I’m glad he helps her garden. She can work me into the ground along with her plants!)

There is one thing about it; if he is doing a project for her, you better believe she is going to be there to supervise. She loves to tell him what to do just after he has started doing the task exactly like she says. When he gets home from their house, I always ask if he had his ‘supervisor’ with him.

It took him a couple of days to get their driveway pressure washed last spring and it looked great – just like his supervisor said it would.

• This is a real switch for me to only sort of match the photos with my papers. I was mostly matching my Mother’s leopard print shirt. She loves animal prints. I think it works because this is really about Mother’s personality not the actual chore.

• The title is cut out twice on the Cricut. I stamped some of the gold dsp with black circles in SU! classic black ink then cut out the letters. I enlarged the letters just slightly and cut them again in black cardstock. 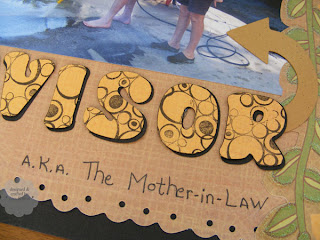 • I downloaded Futura Rounded from dafont.com for cutting the letters with SCAL software. A really heavy font was needed since I was stamping.

Have you ever scrapped about your or your spouses relationship with in-laws? This reminds me of more relationships I keep meaning to capture. Ah well, another day…