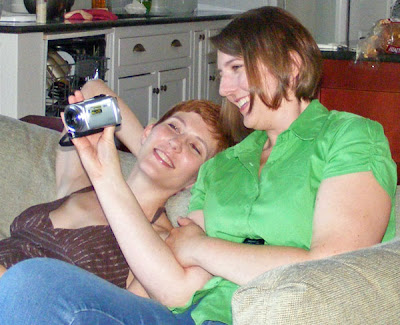 Lenny wanted a camcorder for his birthday. I probably started it as I'd mentioned wanting one to shoot some video on card making for my blog. He has mentioned a camcorder many times in the past and I've always talked him out of it. My feeling was that he would shoot video of an event and look at it maybe once if at all. Whereas with still shots, they make it into scrapbooks and get revisited. Plus there are all the artistic things you can do with photos. And the really great bonus of not having to listen to your own voice. Does ANYONE like their own voice???

My argument was upheld when I asked him how many times he had looked at our wedding video. "Ah, ah, I don't know," meaning the one time we looked at it together was it. He doesn't even know where it is - fortunately I do.

My frustration with videos came from childhood. My father had a 9 mm camera that he used to shoot footage of my Mother and me when I was a baby and also of trips they took together in the early years of their business. I can remember seeing these films exactly once! Since the film was never converted to another media it is beyond salvaging at this point. Plus, since Daddy was the only one who was comfortable with the camera, I dont' think he was actually in any of the video. Then again, it is hard to remember from that one viewing. There were a few snapshots taken, too. Yet far too much emphasis was placed on getting things on the movie film and thus lost forever.

Now I know it doesn't have to be that way. We can continue to take still shots and we can save our digital video to various types of media and hopefully remember to convert it in the coming years to whatever is current. I just had this hang-up. Still, Lenny wanted the camera and nothing else so we all went in and got him a nice camera.

I suppose this is where you are expecting me to say I'm a total convert; I love the camera, should have had one years ago. Well...no. I don't love the camera. But I do like it. I do like the fact that we captured some fun memories of his daughter's visit this weekend and of his birthday party. I did fail to get some of the snapshots I'd planned on. I can not operate two cameras at once. Note to self: Buy tripod!

What I like best about the camcorder can be summed up in the photo above. Amanda and Jaime are watching a playback of themselves 'exercising' on the Wii with their Dad. The expressions on their faces: Priceless.