In Memory - page and video 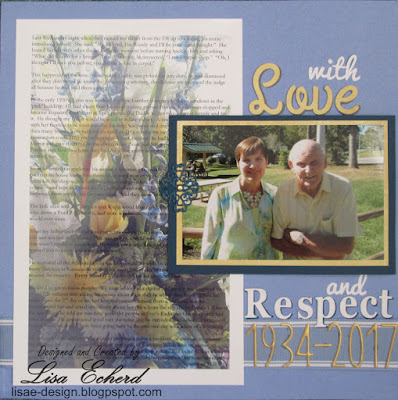 This is my first scrapbook page in several weeks.  My father passed away in late August.  Scrapbooking is very personal to me and I busied myself with cardmaking for awhile before going back to my pages. This one is to capture what was said at the funeral, some of the memorabilia and a good photo I just hadn't gotten scrapped until now.

I realized as I was sharing the video that you could see and read clearly about half of my comments so I could have tried to cover that or just share it so I'm sharing it.  While there were many, many things I could have talked about I chose to focus on my father's ability to connect with people and his passion for thanking those who had extended a kindness or sent business his way.  (Unfortunately I did not inherit those Wedgewood blue eyes or his innate ability to sell.)

Here are my comments about my dad:


Last Wednesday night when they moved my father from the ER up to a room, his nurse introduced herself.  She said, “I’m Wendy and I’ll be your nurse tonight.”  She busied herself with other things for just a moment before turning back to him and asking “What did you do for a living?”  In a clear voice, he answered, “I ran a carpet shop.”  “Oh, I thought I’d seen you before; you did my house in carpet.”

This happened all the time.  Once when Daddy was picked for jury duty, he was dismissed after they discovered he knew the prosecuting attorney, the defense attorney and the judge all because he had sold them carpet.

In the early 1970’s, L was working for S & L company building windows in the ‘pink’ building.  He had a part time business making picture frames. A salesman stopped and became acquainted with him persuading Daddy to just take a carpet sample and try it.  He thought my father would be good at selling carpet.  A few years later, he and Mother with her flawless taste went into the flooring, wallpaper and drapery business full time.  Back then many houses were built on contract and if a contractor steered work your way, enough contractors could keep you in business.  One Christmas he had hand mirrors cut at L Mirror and gave them out to the contractors.  Now builders were all men in those days and I’m not sure how much use they had for a decorative mirror but the builders were almost all married, too.

Soon he settled on apples as his annual Christmas gift, usually delivering the boxes to the contractors house himself to thank them for a year of work.  Individual customers, too, often left the shop with a little something extra – a box of candy – he bought on sale of course – and kept in a chest freezer in the storeroom.  They came in, paid their bill and he surprised them with a box of chocolates.  And they came back again the next time.

The little man with the dimples and Wedgewood blue eyes he inherited from his mother, who drove a Ford F-150 truck, and wore windbreakers, was as unlikely salesman as you would ever meet.

What my father understood was that relationships built on giving a little extra would reward you and not just in business.  This was part of who he was.  You never did anything for him that wasn’t repaid in some way.  He never ran a debt financial or otherwise.  He always wanted you to know you were appreciated.

He nurtured all the relationships in his life particularly with his older relatives.  We spent many Sundays in Kannapolis visiting his aunts and uncles or made 4th of July trips to family around the country.  Every Sunday we went to visit his mother-in-law.

He liked to get to know people.  We were seldom at a doctor’s office for any length of time or the ER without him asking his nurses about their shift or where they lived.  When his nurse from the 2nd day of his last hospitalization returned from a weekend trip, he remembered her and asked specifically about her drive from the city she had visited.  One of the last things he told me was how good the people at the hospital’s radiation oncology unit had been to him.  He appreciated good care the same way he extended it to others.  I imagine if he had lived, we would have been going back to the unit one day with a box of chocolates.

My father seldom told me how to treat people, or solve a problem, or manage my money.  He showed me.   He illustrated a life of gratitude, of matching needs with resources, of saving and of responsibility.  And he did those things with a smile and an interest in who you were as a person.  In the end, his body gave out but his sharp mind and his heart never did.

Here is the video:

Thanks for watching.
Posted by Lisa Echerd at 9:56 AM