The mystery of the lost books 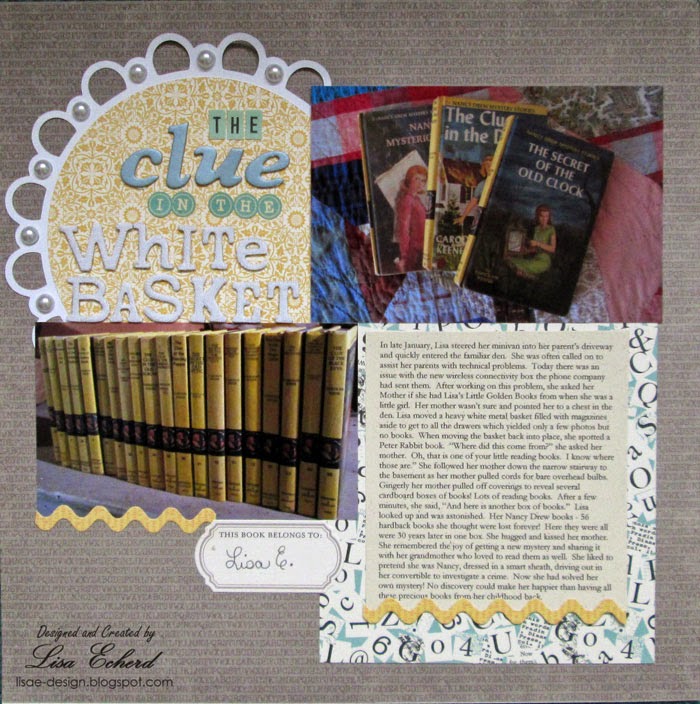 LOAD - Layout A Day has wrapped up for February 2015.  One of the greatest benefits to me from LOAD happened in late January.

The theme was books from our childhood.  So I went searching for my little books as I mentioned in another post and layout. The amazing thing that happened was looking for those books led me to find one of my most prized possessions that has been lost for 30 years!

I found my entire set of 56 Nancy Drew books!  I really thought my mother threw these away.  I couldn't find them at her house and I didn't take them when I moved.  She had no idea where they were - until this January. 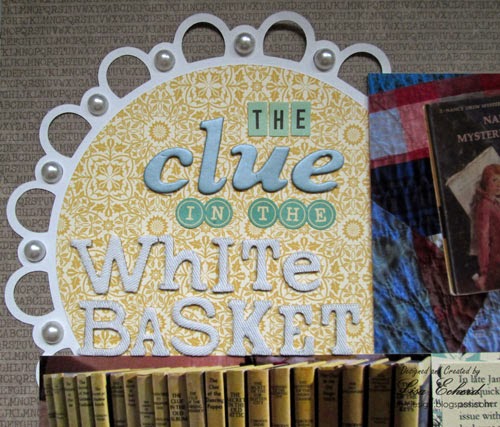 In keeping with Nancy Drew, I wrote the journaling in 3rd person and tried to make it sound like one of the old mysteries:


In late January, Lisa steered her minivan into her parent’s driveway and quickly entered the familiar den.  She was often called on to assist her parents with technical problems.  Today there was an issue with the new wireless connectivity box the phone company had sent them.  After working on this problem, she asked her Mother if she had Lisa’s Little Golden Books from when she was a little girl.  Her mother wasn’t sure and pointed her to a chest in the den. Lisa moved a heavy white metal basket filled with magazines aside to get to all the drawers which yielded only a few photos but no books.  When moving the basket back into place, she spotted a Peter Rabbit book.  “Where did this come from?” she asked her mother.  Oh, that is one of your little reading books.  I know where those are.” She followed her mother down the narrow stairway to the basement as her mother pulled cords for bare overhead bulbs.  Gingerly her mother pulled off coverings to reveal several cardboard boxes of books! Lots of reading books.  After a few minutes, she said, “And here is another box of books.”  Lisa looked up and was astonished.  Her Nancy Drew books - 56 hardback books she thought were lost forever!  Here they were all were 30 years later in one box. She hugged and kissed her mother.    She remembered the joy of getting a new mystery and sharing it with her grandmother who loved to read them as well.  She liked to pretend she was Nancy, dressed in a smart sheath, driving out in her convertible to investigate a crime.  Now she had solved her own mystery! No discovery could make her happier than having all these precious books from her childhood back.

For the page I used a sketch from last year which you can find in the 2014 Sketchbook.

Also I used some pearls as I was obsessed with the kind of clothes Nancy wore in the illustrations, pearls included.

Thanks for watching and stay tuned for some new things coming along in March.
Posted by Lisa Echerd at 9:15 AM