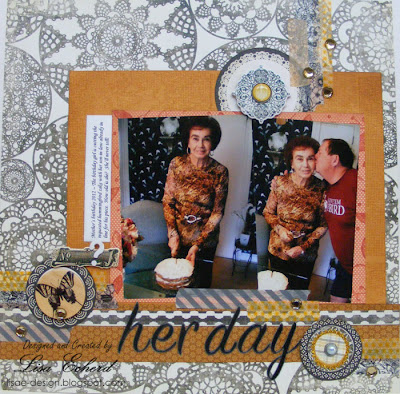 My Mother's birthday was over 6 months ago.  This weekend I scrapped the photos.  Notice the little question mark next to the 'number' chipboard element.  She won't let me reveal her age.  Other than medical personnel, she doesn't tell anyone how old she is. 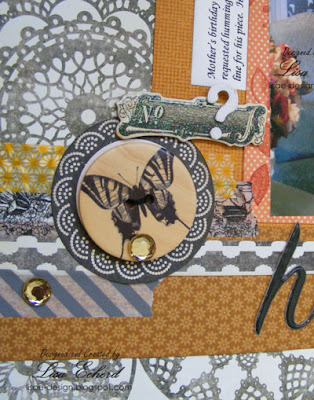 A little story goes with this...

At some point when I was growing up - when I was old enough to do basic math and still young enough to believe anything I was told, I came across my birth certificate.  I figured out if I added the age I was then to the age my Mother was on the birth certificate, it was older than what age she was on her last birthday.  Something didn't make sense.

So I asked her about it.  "Oh, they just made a mistake on your birth certificate," she said.

Some time later, I was staying at my grandparents for the weekend and I told my Mother's oldest sister that my birth certificate had a mistake on it.  "What kind of mistake?" she asked.  "They have Momma's age wrong.  It says X and she wasn't that old."

A loud "hmph!" errupted from my aunt and she told me there was no mistake. That was exactly how old my Mother was when I was born.

That night I learned something new and it had nothing to do with math.

So for the most part, I keep Mother's secret and we often refer to her as 'the beautiful woman of unspecified age.'  :-) 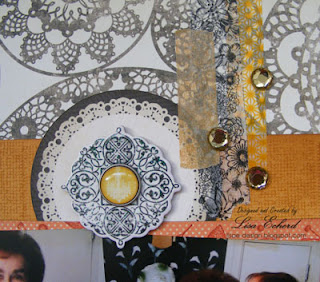 For the layout, I used several things from Artfuldelight kits including the October kit.  I don't used a lot of high contrast color schemes, particularly black and white.  This just isn't me, but it is my Mother.  She wears these colors beautifully so the background paper from the kit was a great choice.

I didn't have enough rust colored papers so I stamped and distressed some orange polka dot and cardstock to finish out my paper choices.

There were several Washi tapes in my stash in these colors so I used a few strips and sprinked on some rhinestones.  I think this layout was inspired by the ones Shimelle makes.  Two photos, lots of pattern paper and some tape strips in several places to tie it all together.

Now back to ages.  Have you ever lied about your age?  The only time I have is for things on-line where they have no business knowing my real birth date.  It is just for security.

Thanks for stopping by today!
Posted by Lisa Echerd at 7:30 AM