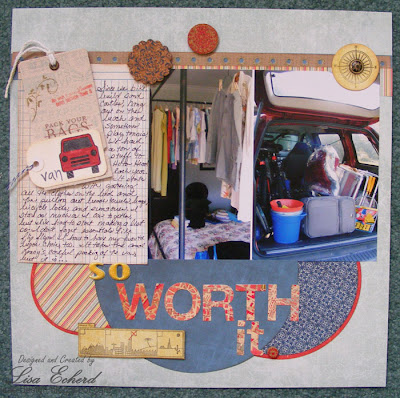 Here's what I like about this layout:  The subject matter.  I took this photos of our preparation for going to the beach.  We go through same routine every year and it seems like we take half the house for a week's trip.  We bike, sometimes play tennis and spend time on the beach so there is a ton of paraphernalia to make all the happen.  We've got it down to a real science just how much we can pack into my van. 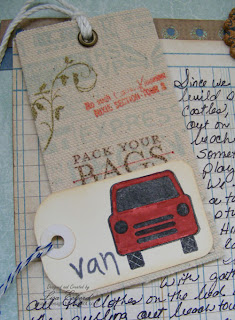 I also like the embellishments.  Since the photos had so many different colors.  I picked the embellishments first and then chose the paper to go with them.  The little 'van' is from a Fiskar's stamp set I got at the dollar store.  I'd never used Fiskars before, they ink wonderfully.   I like the Pink Paislee paper also.

The layout is from a great sketch over at Artfuldesign. Check it out and if you have a chance to create a page in the next few you might win her March kit.

Unfortunately, despite having lots to like about the page, I just don't care for the way it turned out.  I think the photos were too big to start with and I never really overcame it.  I'm not crazy about my handwritten journaling though that doesn't seem to bother me so much here. Maybe it is also because I flipped the sketch over putting the circular elements on the bottom.  I also made it asymmetrical.  It was a terrific sketch in the original form.  I'll have to see what the other posters did with it.

Something here just doesn't work for me.  Yet, I'm leaving it as is.  I've captured the story.  Every page doesn't have to be my favorite.  Sometimes you just need to move along.

Now moving along...it is a very relevant page though as this year we will be packing up a different van.  We brought home our new Honda Odyssey on Valentine's Day!  I'm both happy and a bit sad.

I'm sad because for the first time in my life I'm not owning and driving a Ford.  I have loved my Ford's.  I'm very proud of Ford for not needing or taking a bail-out and for the upturn in their business.  Unfortunately, Ford no longer makes a minivan and I have to have one.  In order to haul the window treatments I make, I've got to have at least 7 feet of straight space in the back and even more room from the back up to the dash for longer treatments.  Last fall I had a 12' rod in my old Windstar.  It went from the back corner to the windshield but it fit along with the draperies and the ladder so everything went in one vehicle, one trip.  Without going to a really big, super expensive SUV, a mini-van is a must.

We narrowed the choices to Honda and Toyota.  The Honda suited me a bit better when I drove it and the seats were easier to let up and down. It really came down to little stuff.

I'm very happy to have the car buying process behind me. If nothing goes terribly wrong, I keep a vehicle 12 years or so.  I just can't imagine why anyone wants to put themselves through that game-playing negotiation process more frequently.  (shudder)  Very happy to have that done.

Now for the color.  Color always comes down to a process of elimination.  It seems most automakers have embraced Henry Ford's mantra, "You can have any color as long as it is black."  Today you can amend that to black, white and silver and you almost have all the choices.

My first car was in fact black.  I kept it for 13 years. My first van was a beautiful blue which I loved.  However, it had an unfortunate altercation with a utility pole so I had to replace it. The blue was no longer available in the model I wanted so I chose the only non-neutral available and got red.  I liked it and so, apparently, did a lot of other people. Even in my little town, I could not go into the Walmart parking lot without scanning about 3 other red minivans at one time to see which was mine.

This round also got down to one non-neutral color.  Honda makes a beautiful blue but not in the base model (I'm a no frills person when it comes to vehicles.)  So that left me with (you guys are so smart, it's in the red family)...

Dark cherry pearl.  Think Bravo Burgandy with a coat of Glossy Accents.  The interior is a perfect match to Sahara Sand. Yes, I really did take my cardstock sample deck outside and see what matched.  Am I a little too entwined with my hobby?

So now to get used to a new car and air out that new car smell that gives my husband a headache. Seriously he refuses to even ride in it for the next few weeks.  I guess I'll just have to do all the driving.  Oh, what a tough job.  :-)

It's the base model but it still has a lot of stuff I've never had before like a CD player, a passenger door on the driver's side, and power driver's seat.  Yeah, I know the rest of the world has had that stuff forever, but it is new and fun to me.