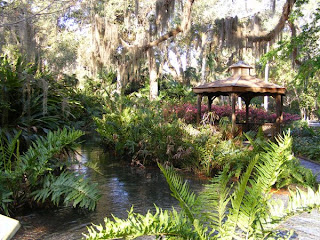 I had hoped to come back from Florida and post a great shot of the Space Shuttle Discovery's night launch on Wednesday evening. We were in Florida at Kennedy Space Center on Wednesday, but the launch had to be delayed. Of course we were disappointed but the safety of the astronauts is paramount. A fuel leak was discovered and they scrapped the launch just hours before it was scheduled. We did get to complete our tour of the space center and decided not to stay in Florida until Sunday when the next target date is. I hated I couldn't make Lenny's dream of seeing a launch come true.

This was an unusual trip for us. We seldom have a scheduled event as the focus of our trips, much less one that required great flexibility (Apparently,8 different launch dates in a month is my flexibility limit.) We typically pick a place, a good time of the year for traveling to that location, and make plans from there. We seek out places of natural beauty, usually national or state parks and we both enjoy museums. Lenny prefers science or history museums and I like the arts, particularly decorative arts or American art. I got to see both of my favorites on this trip. I'm pictured here in front of an early 19th century desk at the Lightener Museum 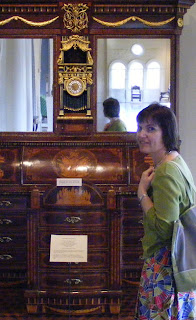 in St. Augustine. This may be the first museum where we were allowed to take photos! Mr. Lightener published a magazine called Hobbies in Chicago in the early part of the 2oth century. He was a collector and because of his magazine had many collecting passions. During the searly days of the depression, he bought many items for pennies on the dollar. He purchased an old hotel building that had gone into bankruptcy during the depression to house his collection and donated the entire thing to the city of St. Augustine. It is astounding the array of items he collected. Glass, porcelean, furniture, cigar bands, musical instruments. We had a fun morning exploring museum contents housed on the floors of the building which was used for the hotel spa - one that would rival any fancy spa today.

The other museum we visited was the Morse Museum of American Art in Winter Park (Orlando). Housing the largest collection of Tiffany's work, both glass and paintings, it was a stunning tour. If you are ever in Orlando, it is more than worth an hour or two. Plus Winter Park houses quaint little shops amid its tree lined residential streets.

The photo at the top is from the Washington Oaks State Park along the Atlantic coast north of Daytona. It is one of 3 we visited. Ravine Gardens' focus is azaleas which were in full bloom.

Florida is better known for racing, sunbathing and theme parks. And we've certainly done more than our share of theme parks over the years. But true beauty is easy to find too. (And a good deal cheaper than Disney).